The concept for the construction of the Racibórz reservoir was created already at the turn of the 19th and 20th centuries. At that time, a flood protection system for the Upper and Middle Odra basin was planned in response to catastrophic floods. The following structures were then envisaged to be constructed: storage reservoirs, dry polders, flood relief channels, and dikes. The major works associated with the implementation of this concept were completed in the 1930’s. However, the Racibórz reservoir was not built during that period. The flood that occurred in July 1997 showed that the existing flood defenses were insufficient. The General Flood Protection Strategy for the Upper and Middle Odra River Basin, prepared by the company Hydroprojekt Wrocław, stated that effective flood protection for the Odra valley from Racibórz downstream to Wrocław could not be provided without the construction of the Racibórz Dolny flood reservoir. Given the above, this investment became one of the more important elements of the “Program for the Odra River – 2006” adopted by the Polish Sejm (Parliament) on July 6, 2001.

The investment area was located in the following four municipalities:

A total area of about 1145 ha was acquired permanently for the purpose of the construction of the dry polder.

Although the polder will be flooded only during extreme floods, with a return period of more than 10 years, the Polish regulations required all land/properties located in the dry polder basin to be purchased by the Government and transferred to the Regional Water Management Authority in Gliwice (RZGW Gliwice), which is responsible for the operation of the polder for flood control purposes. Therefore, all privately owned lands and buildings located in the dry polder basin were purchased by the Government.

The completed dry polder reduces flood peaks in the Odra River, impacting directly and indirectly an area of about 600 km2, which means that flood protection is provided for 2.5 million people living in the following voivodeships: Śląskie, Opolskie, and Dolnośląskie. Upon the arrival of a flood wave, the Racibórz dry polder will store floodwater, thus protecting the health and property of residents of the cities and villages from Racibórz through Kędzierzyn-Koźle, Brzeg, Opole, and Oława downstream to Wrocław.

Floods with a magnitude of Q = 1 210 m3/s (the permitted flow for ecological reasons with a probability of 5%, that is, a flood with a return period of 20 years on average) will be directly conveyed through the dry polder without impounding water. Apart from flood events, the dry polder will not be filled (except for the water bodies in gravel pits and the Odra itself). Flood peaks greater than the permitted flow of Q = 1,210 m3/s, as determined in the environmental impact assessment report for the Odra section downstream of Racibórz, will only be reduced. Flood peaks of up to 2400 m3/s (this is a flow with an exceedance probability of 0.2% – close to the design flow) will be reduced by the reservoir to the permitted flow of Q = 1,210 m3/s. Greater flood peaks, e.g. a flood peak similar to the 1997 catastrophic flood with a flow estimated at 3,120 m3/s, will be reduced to 1,538 m3/s.

The construction of the Racibórz dry polder caused resettlement of about 700 people, 250 families, residing in two villages situated within the proposed boundaries of the polder and the loss of land located within the polder’s boundaries by land owners residing outside the polder basin. Therefore, as part of this investment the New Village of Nieboczowy was built in cooperation with the local government.

The Racibórz Dolny dry polder meets all environmental requirements, in particular those regarding free fish migration. This is made possible due to the sill-less bay that will always be open except for flood periods and each of the bottom outlets, a part of which will also be open and whose bottom is at the riverbed level. From the environmental point of view, a dry polder, preserving the existing Odra channel, is a beneficial solution that ensures biodiversity and the preservation of the natural environmental and landscape values of the Odra valley. 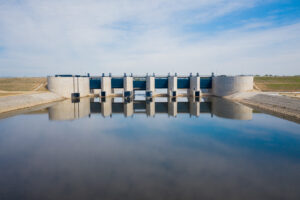 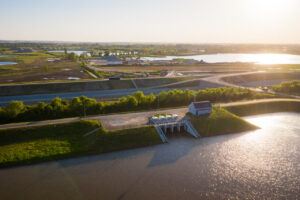 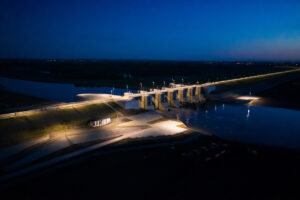 22kmlength of the dam and embankments around the dry polder